The vagaries of winter weather can play havoc with airport operations, but Norway’s Avinor has got it covered, finds Tara Craig

Tromsø Airport serves the third-largest urban area in the Arctic Circle, and relies on effective operations during the harsh winter months
Key/Gordon Smith

“Wintertime is fun time!” declares the Visit Norwa boasting of seasonal attractions such as skiing, whale watching and the Northern Lights.

There’s no denying that Norway is a wonderful place to be in the winter. But there’s also no avoiding the fact that the same glorious weather conditions have the potential to jeopardise travel to and from this beautiful Scandinavian country.

Much of the responsibility for ensuring that air travellers can move freely not only into and out of Norway, but also within the country, lies with airport operator Avinor. A limited company wholly owned by the Norwegian Ministry of Transport and Communications, Avinor operates 44 state-owned airports and runs the national air navigation service. Every year some 50 million passengers travel smoothly through Avinor-run facilities, thanks to the combined efforts of more than 3,000 employees.

Norway’s climate and location mean that the weather has a huge impact on how Avinor conducts its operations during the winter, according to Thorgeir Landevaag, EVP for national, regional and local airports. “With harsh climatic conditions, our airports have to work hard and in a targeted way to ensure minimal traffic delays”, he explained.

While all of Avinor’s airports experience challenging conditions in winter, the infrastructure and meteorological conditions vary greatly between facilities. Those located in northern Norway are especially vulnerable due to the high number of days with snowfall and the corresponding snow depth.

Thorgeir continued: “This puts great strain on Avinor personnel and equipment to ensure that we keep our airports open for traffic. Furthermore, the winter season poses a great challenge for our larger airports as well – for instance, Oslo, Bergen, Trondheim, Bodø and Tromsø – as these are dependent on having a highly effective structure in place to keep the airport running.”

Norway’s topography means not only that the country is reliant on its airports, but that the facilities are vulnerable to harsh weather
Key/Gordon Smith 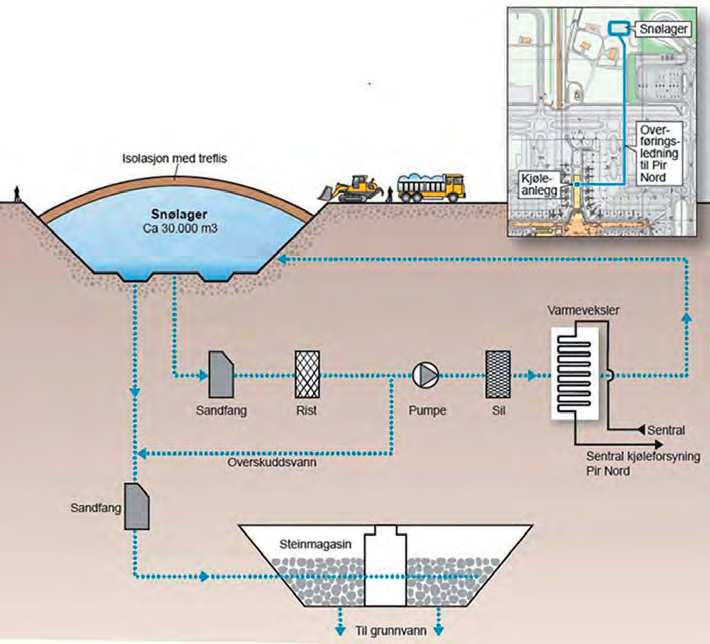 Avinor aims to reduce purchased energy by 25% by 2020, through innovative projects such as using snow to cool Oslo Airport’s North Pier
Avinor

While operators in sunnier climes build banks of solar panels, Avinor has come up with a smart, eco-friendly way to repurpose something it has in great quantities: snow. Huge amounts of it are cleared from the runways of Oslo Airport each winter, then divided into two categories, pure and impure, based on whether de-icing chemicals are present. The polluted water from the impure snow goes to the municipal treatment plant. Pure snow, on the other hand, is allowed to melt naturally and sink into the ground, helping to maintain the water balance in the soil around Oslo Airport, which is part of the licensing requirements for being allowed to operate the airport.

First, however, the pure snow is collected in a large stockpile shaped like a basin, which, when full, is covered with sawdust for insulation. The coldness of the meltwater is recovered in a heat exchanger and transferred to the central cooling plant. The meltwater is returned to the stockpile to repeat the heat exchange with the snow and ice in the snow stockpile, followed by a new cycle of transmission of cold energy to central cooling systems. The energy produced from the snow and the cold meltwater is then used to cool Oslo Airport’s North Pier on hot days.

At Oslo Airport, for example, there can be up to 75 vehicles and as many dedicated employees in operation on a day with heavy snowfall. Across Avinor airports, around 700-800 employees are directly involved in winter operations. In addition, the operator employs several hundred seasonal workers each winter.

Asked how Avinor ensures that its airports are always ready for whatever challenging weather conditions arise, Landevaag said: “As an airport operator, the most important thing we can do is to have good governing principles and procedures in place to help guide and steer our personnel.”

A key part of this, he explained, revolves around building on experiences from previous years and using these to continuously adapt routines and equipment. For example, ahead of each winter season, all Avinor airports arrange a ‘start-up’ meeting with stakeholders, including internal and external personnel, ground handling and air traffic control staff. Everyone involved must have a good understanding of the procedures and processes, and of any operational differences from the previous season.

According to Landevaag, for Avinor, the number one priority with regards to winter operations is to prevent and reduce the extent of aviation accidents that can be directly linked to the weather conditions. As such, he says, the operator’s procedures and processes are continuously updated to ensure that air traffic is conducted in a safe manner and that civil air traffic can be maintained to the greatest possible extent.

Avinor invests in new equipment ahead of each winter, with the level of investment varying from year to year depending on the equipment’s life cycle and the individual needs at each airport. For the operator, having an up-to-date fleet of vehicles is a prerequisite for conducting safe and efficient winter operations. “As a broader strategic initiative,” said Landevaag, “Avinor is currently working on standardising its fleet of vehicles to reduce maintenance costs and simplify maintenance and training routines.”

Automating winter operations is seen as a key factor in improving efficiency and reducing cost over the long term. At present, Avinor’s winter operations have a low degree of autonomy, although this is something the operator has been looking into since 2010. In 2019, for example, Avinor tested two fullyautomated runway sweepers at Oslo Airport in collaboration with Yeti Snow Technology, a Norwegian firm owned by Semcon, Øveraasen and Husqvarna. The vehicles, measuring 20m x 5.5m, worked alongside conventional, manually operated sweepers. While winter 2020 will see a return to using only the latter, Avinor is soon to launch a tender for automated sweepers, and hopes that, over the long term, increased automation will not only improve the efficiency of its snow clearing but will yield financial benefits. 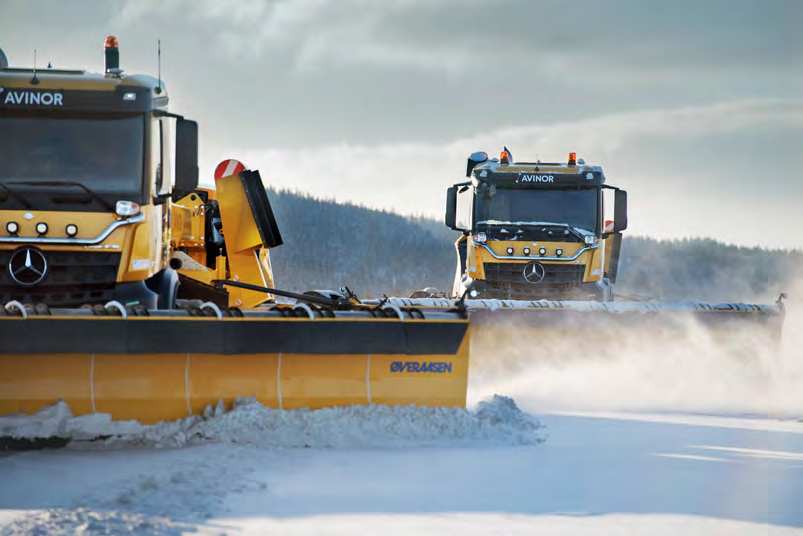 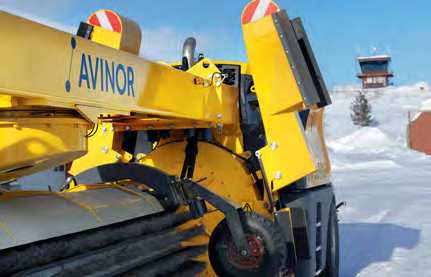 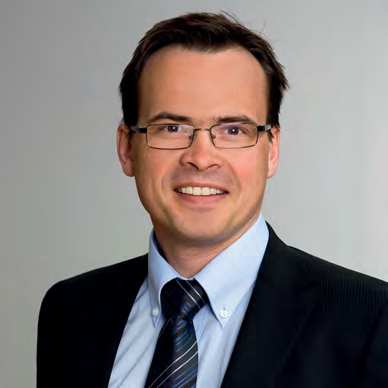 Avinor employs a range of technologies to help safeguard its winter operations, while providing valuable data and making life easier for operational staff. “Avinor has, for example, developed its own weather system, IRIS (Integrated Runway Information System),” explained Landevaag . “IRIS provides real-time information [on, among other things, weather conditions, temperatures, wind levels and runway condition/friction] that enables our staff to conduct precise and timely maintenance based on the prevailing conditions on the runway.”

An Avinor pilot scheme has looked into the use of sensor technology to measure freezing points on the runway, with this information having the potential to help reduce the use of chemicals on the runway. The operator is also working towards the introduction and implementation of the new reporting rules for runway conditions (SNOWTAM) set by the International Civil Aviation Organization (ICAO). 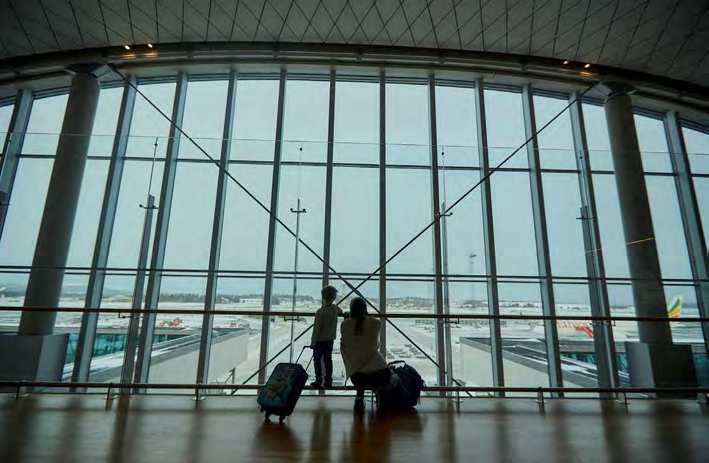 All 44 Avinor airports, regardless of their capacity and variances in the local climate, function efficiently in winter, thanks to careful planning
Avinor

Avinor is confident that it has the right elements in place to ensure effective winter operations. So much so that it expects to roll these out at the new Bodø Airport, which is still several years from completion. Currently under construction in Bodø municipality, just north of the Arctic Circle, the new facility will feature much of the winter equipment already in use by Avinor, according to Landevaag. Looking ahead, he explained, it is likely that the operator will consider the use of autonomous snow clearing products such as runway sweepers at the new airport.

Climate change has brought greater variations in the weather during Norway’s winter season. Whereas previously the country experienced long and stable winters, Avinor’s airports are now dealing with milder conditions, marked by varying temperatures and precipitation. “Some of our airports, especially those in southern and western Norway, can experience a mixture of rain and snow on the same day,” said Landevaag. “This places great strain on our personnel and equipment, and highlights the importance of having well-established routines and procedures. Lower temperatures also pose an environmental challenge, requiring increased use of chemicals to keep the runway open.”

Of course, effective airport operations in 2020 must take into consideration more than the changing climate. The COVID-19 epidemic has resulted in a dramatic decrease in activity and traffic levels, leading Avinor to temporarily reduce its operational capacity for the winter season. The operator continues to assess how to operate rationally and efficiently based on current traffic levels and needs, according to Landevaag, who points out that the number one priority is to maintain safety levels and adhere to the standards and governing rules that are already in place. 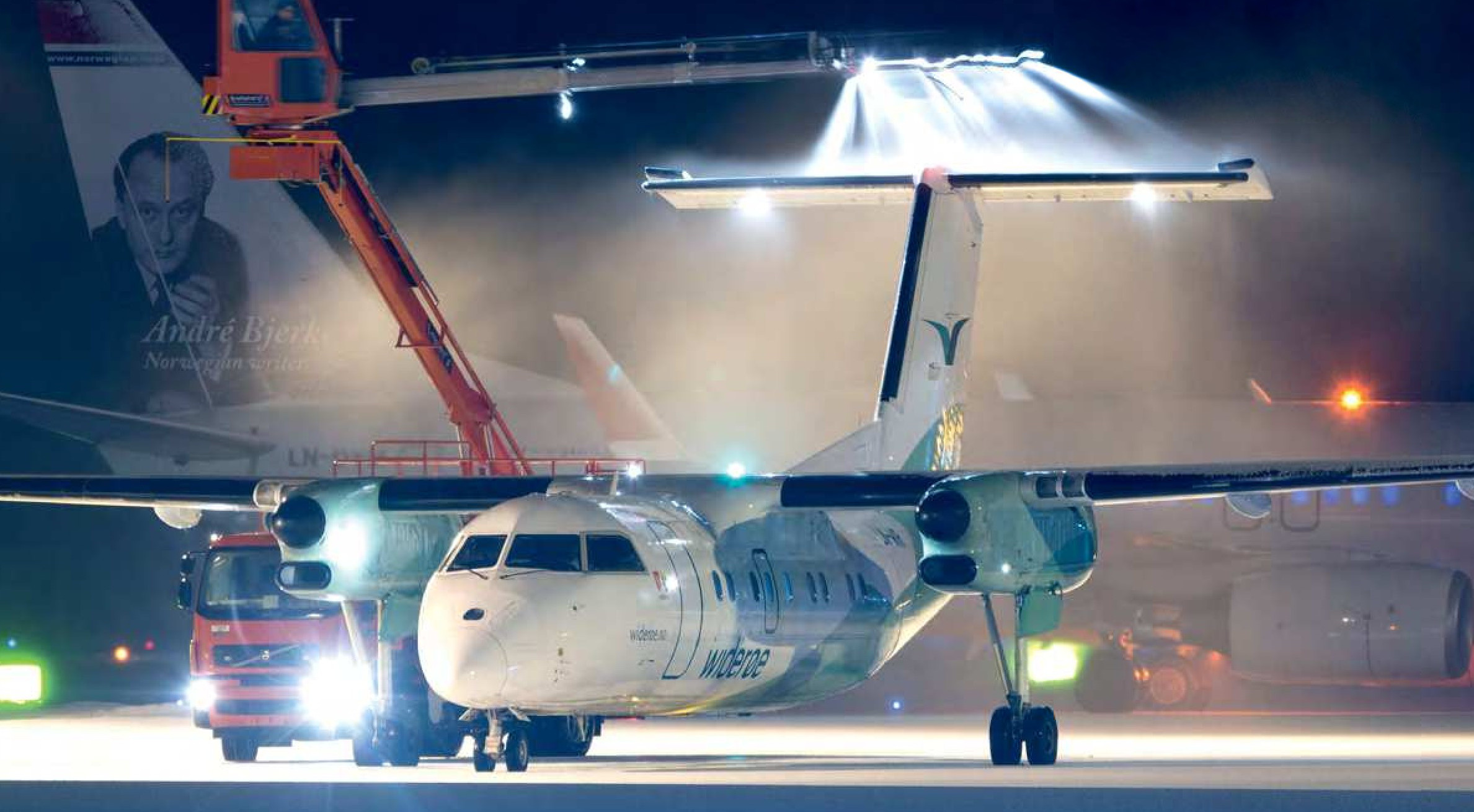 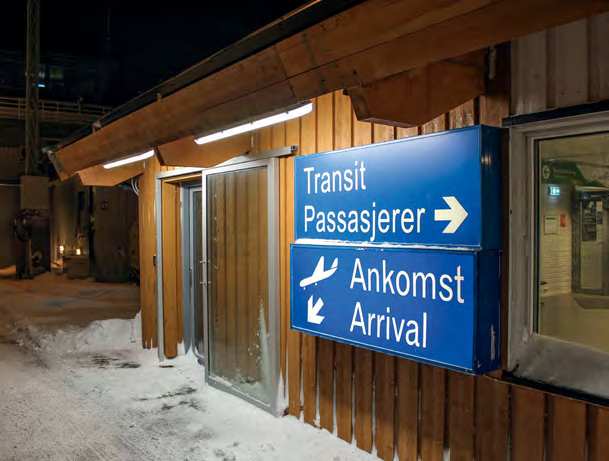 As one of Avinor’s smaller airports, Vadsø is subsidised by public service obligations arranged by the Ministry of Transport and Communications
Key/Gordon Smith

Furthermore, Avinor has developed a Microsoft (Assure and Power BI) based system that receives real-time data regarding chemical outlays on the runway. This is in use at Oslo and Bergen airports, where it helps document where and when chemicals have been used.

Avinor’s main facility, Oslo Airport, uses de-icing fluid consisting of a mixture of hot water, propylene glycol and additives. This is the most environmentally-friendly de-icing fluid on the market, according to Avinor, as the additives make up less than 1% of the fluid and are not toxic to the environment around the airport in the quantities used. The water-to-glycol ratio depends on the air temperature, with colder days requiring more glycol.

De-icing takes place on three dedicated platforms, with specially designed systems collecting excess water and de-icing chemicals next to the platforms, alongside the taxiways and at the start of the runways. At Oslo Airport, around 80 % of de-icing chemicals are collected and taken to Gardermoen purification plant for treatment. The remaining 20% drains off into the ground around the runway system or is carried farther afield by the aircraft.

Landevaag believes that Avinor has the right structure and systems in place to cope with any winter, stressing that all of its airports are “doing a formidable job.” This success is regardless of the size of the airport and the climatic conditions involved, he claims.

“Our smaller airports do a fantastic job in keeping the runway open for traffic with limited personnel and equipment, and our airport hubs cope with the daunting task of organising and co-ordinating operations during the winter season,” concluded Landevaag.