The BEUMER Group has installed the first tote-based independent carrier system (ICS) in a US airport.

The CrisBag ICS was installed in the recently opened Harvey Milk Terminal 1 at San Francisco Airport (SFO) and is designed for shared airline use. The manufacturer said the ICS enables 100% track-andtrace as each bag remains in the same tote throughout the baggage handling and integrated security screening process. The addition of an explosives detection system (EDS) makes CrisBag the first system to be certified by the Transportation Security Administration (TSA) for intote baggage security screening.

The airport consulted BEUMER when the terminal was still in its planning stages, so that it could co-ordinate the baggage system’s installation with building work. The CrisBag equipment was installed and The first tote-based baggage handling system in the US is now operational at San Francisco Airport BEUMER tested while the existing Terminal 1 remained in operation, supported by an interim baggage system put in place by BEUMER.

Moving to a shared use baggage system allowed redundant routes to balance the load between the computer tomography X-ray (CTX) machines, which reduced the number of security screening machines to seven. Previously, airlines owned and operated 15 CTX machines independently within their own baggage systems.

The TSA tested the EDS to evaluate its tracking, throughput, imaging, false-alarm rates, and sorting capabilities as well as to check the system’s ability to detect missing, unknown and oversized bags. BEUMER said that with 100% track-and-trace there is no loss of baggage tracking and the CrisBag system reduces manual handling at the TSA’s checked baggage reconciliation area (CBRA) inspection stations.

Final permission for the system to go live was given by the TSA, when the integrated site acceptance test (ISAT) was received earlier this year. 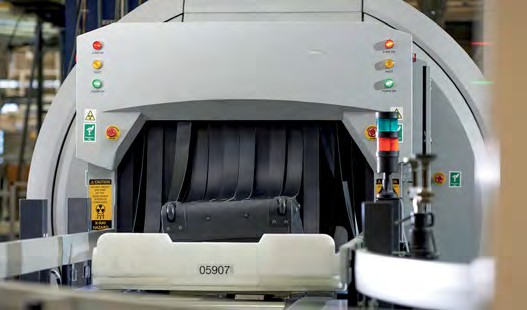 The manufacturer said the layout of the CrisBag ICS has also enabled the airport to significantly reduce tug traffic. The inbound, transfer and outbound processes are handled in the CrisBag system and located in the baggage operational areas, which are distributed throughout the terminal boarding area adjacent to the aircraft gates. Arrival baggage is taken via tugs from a flight and delivered to the inbound system infeed and the tug returns with the outbound baggage for a different flight. The totes from the makeup area are returned to the main terminal building carrying the arrival bags. This optimises system operation and increases capacity by avoiding circulating empty totes. The reduction in tug traffic benefits the airport and can reduce emissions.

The SFO T1 redevelopment is scheduled for completion in 2023. BEUMER has also been awarded a contract for a new baggage handling system in SFO’s Terminal 3.