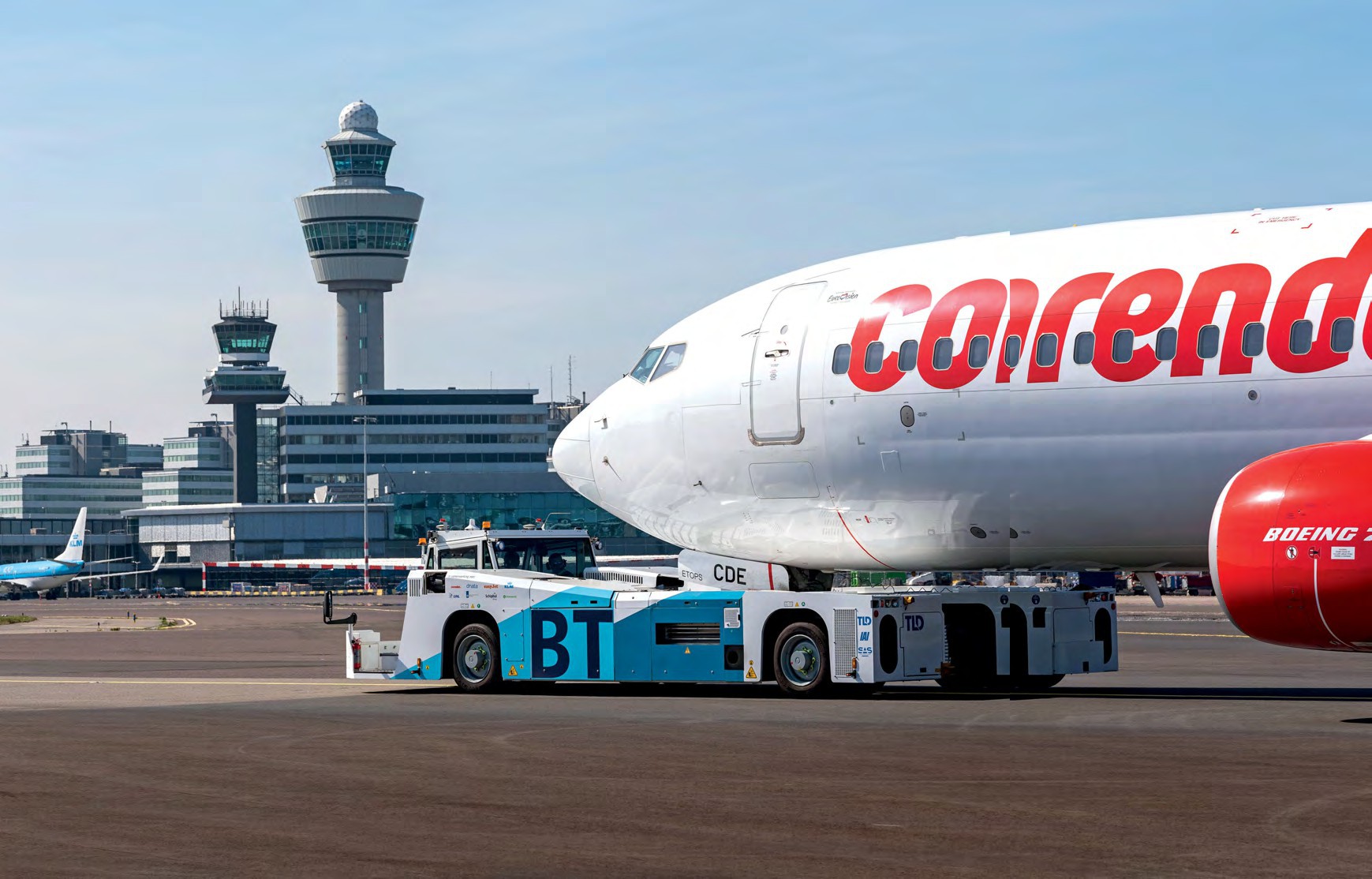 During the trial, potential fuel savings were maximised during departures to 36L, the runway with the longest taxi times at Amsterdam Schiphol
AMS

The much-reduced flying programme during the COVID-19 crisis has provided an ideal opportunity for Amsterdam Schiphol to trial a narrowbody TaxiBot aircraft tow-tractor. As reported in our last issue, it was used to manoeuvre several based aircraft on the quieter-than-usual airport. This trial is part of a wider feasibility study into sustainable taxiing at the airport, which focuses on how the TaxiBot process can be integrated into daily operations, whether it is achievable on a large scale, how long the transition phase will need to be and when it will take place.

Long-time readers of Airports International will surely recognise the TaxiBot name as it has featured in the magazine on numerous occasions since development began around a decade ago. However, if you have not seen one in action, they work in a very different way to traditional aircraft tow-tractors.

The TaxiBot gets its name from being semi-robotic. It was developed through a partnership between Israel Aerospace Industries (IAI), the French GSE manufacturer, TLD and Airbus. It is different from other gate-to-runway towing vehicles because of a mechanism that connects the tug to the aircraft, which allows both tractor and airliner to be manoeuvred by the pilots from their cockpit while the aircraft’s engines are shut down. It is intended to save fuel that would otherwise be burned when the aircraft taxies under its own power.

The TaxiBot still has a driver who sits in its cab for the pushback phase and for safety reasons, but once the pushback is complete, the vehicle is controlled by the aircraft’s pilot, steering it via the same tiller used during normal, engines-on taxiing manoeuvres. Braking actions utilise the aircraft’s brakes rather than the tow-tractor’s, thereby reducing the stresses normally being placed on the airframe’s nose gear.

The key element of the TaxiBot’s viability is how much aviation fuel it can save and what volume of emissions it can reduce. During the towing process, the departing aircraft’s engines are only switched on at a suitable stage, such as a taxiway holding point as it approaches the end of the runway, after which the tractor is driven back to the terminal while the aircraft departs. The vehicle is powered by a hybrid combination of electric and diesel engines which, according to the manufacturer, consumes 95% less fuel when taxiing than the aircraft engines would normally use. Another unique element of the TaxiBot’s use is its crabsteering mechanism that keeps it in line with the fuselage of the aircraft it is towing, regardless of any turns.

The TaxiBot vehicle used at Schiphol this summer belongs to Smart Airport Systems, a sister company of TLD, and is one of only ten in the world. The tests were conducted in co-operation with Schiphol’s air traffic control provider, LVNL, the Netherlands Ministry of Infrastructure and the Environment, as well as Corendon Dutch Airlines, KLM, Transavia and easyJet. The aircraft handling services were provided by dnata and KLM Ground Services and began by towing an empty Corendon Boeing 737 to several runways and ultimately progressed on to ‘live’ operational aircraft.

Schiphol said that the average taxi time for departing aircraft is 14 minutes, while inbounds take around nine. An important element of the TaxiBot study was to establish the best uncoupling points at the airport as, by the nature of TaxiBoting, these uncoupling locations were new for both pilots, TaxiBot operators and air traffic controllers.

Measurements were taken throughout the testing phase to establish what benefits are achievable and the numbers are still being crunched, but after more than 170 taxiing tests were completed, the operational phase was over and the  vehicle returned  to its owner in mid-August.

The question is how  many TaxiBots can be  out on the airfield at  the same time?

Having worked with LVNL to test the vehicle’s impact on the flow of aircraft movements and looked for any potential difficulties that could affect daily operations, the two organisations are now working with computer simulations based on the data from the operational tests. This phase seeks to establish how using multiple TaxiBots at the same time could affect the flow of aircraft. Can several of these tractors be out on the airfield at the same time without slowing things down? That is the answer that is being sough.

The airport’s project leaders, Dirk Bresser and Simon Prent, both belong to the airport’s operational innovations team and have recently started blogging about the ongoing tests to answer some of the questions raised. They say that while it would be great to give a clear percentage that would explain what can be gained from sustainable taxiing, it’s not possible yet. A range of figures must be used, and they are based upon three approaches to saving fuel and, therefore, emissions.

First, savings as a percentage of the total flight. Schiphol estimates this figure to vary between 4-9% of the total fuel used during a flight, which it said, in theory, gives it a good indication of the impact sustainable taxiing has on total emissions. Should that be considered to be ‘a drop in the ocean’, or does it really make a difference? The airport project leaders think that these percentages “don’t mean much, as they largely depend on the duration of each flight.” They explained that the shorter the flight, the longer the aircraft must spend taxiing relative to that shorter flight time, and the greater the proportion of fuel consumed while taxiing.

Next there are the potential savings at ground level. Here, the airport can calculate the percentage of fuel it wants to save, relative to the total fuel consumed while taxiing. It said this is the most common way to calculate savings, but noted that this method also leaves a big variation between the lower and upper percentages, ranging from “a conservative saving of 50% to an optimistic 85% gain.”

Finally, you could choose to calculate the savings per taxiing minute. Here, the airport compares one minute of sustainable taxiing against one of conventional taxiing. How much fuel do two aeroplane engines consume, compared with the new method of taxiing? Schiphol believes that, in an ideal world, this comparison would be meaningless and it could expect to see a 100% saving. This, the project leads said, presents a problem: “You could talk to someone today who claims to be saving 4% of fuel, then tomorrow someone else could tell you it’s actually 95% – and they would both be right.”

So, work is ongoing to establish what savings can be made. Mr Bresser said: “Unfortunately, we’re not there yet. All round the world, people are still searching for a way to taxi without using any fossil fuels. The current percentage [of taxi fuel that can potentially be saved] is estimated at about 95%.”