As Canada’s winter season looms on the horizon, Carroll McCormick explains how St John’s International Airport coped when a blizzard and high winds effectively buried the facility in snow earlier this year 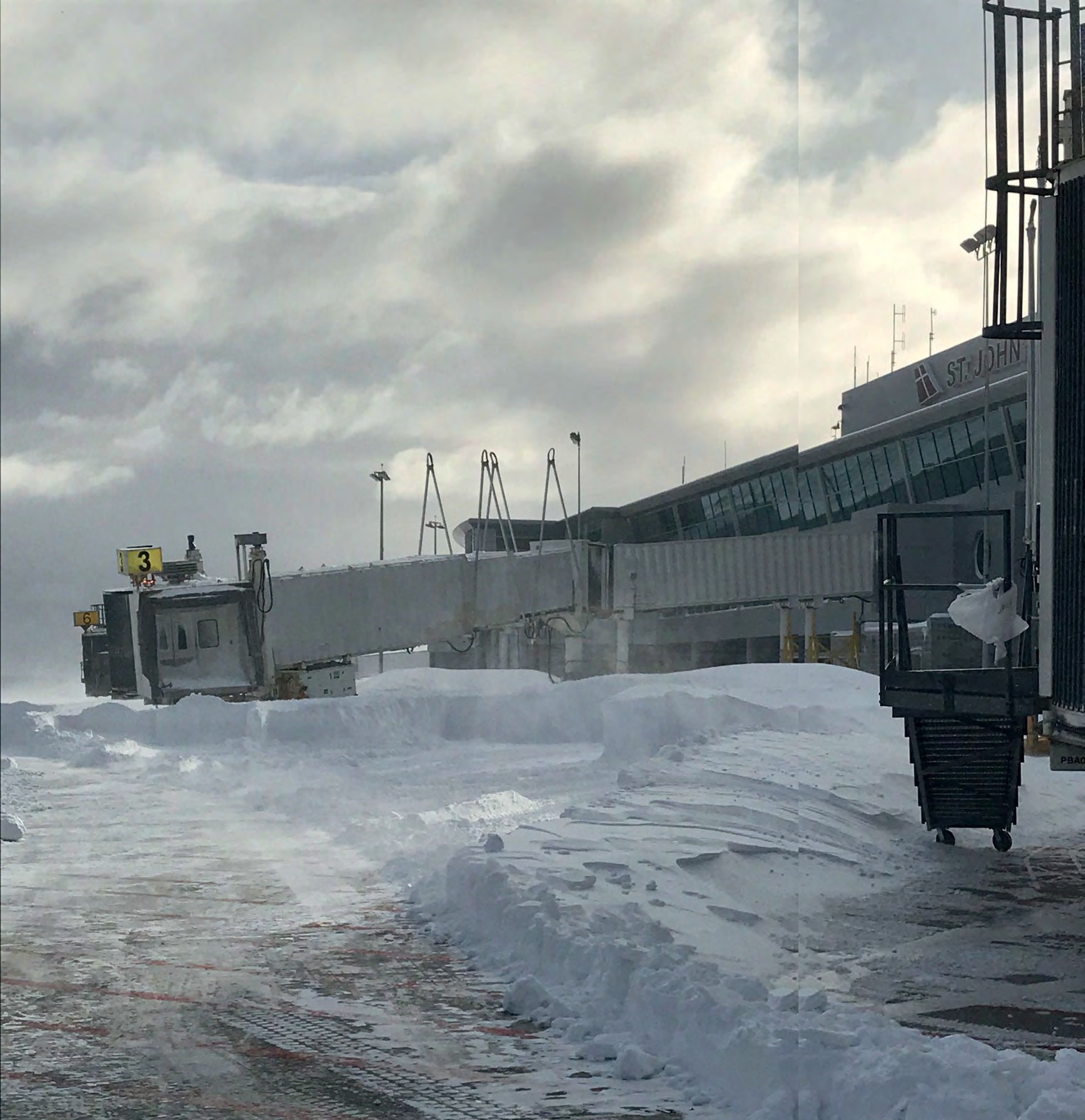 They called it ‘Snowmaggedon’. The storm that hit Canada’s St John’s International Airport (IATA: YYT) on January 17 delivered nearly 31.5in (80cm) of snow and hurricane winds that gusted to over 124mph (200km/h).

The airport could see a weather event approaching five days earlier, but the closer it came, the larger it grew. Wayne Morris, the airport’s manager of airside services and acting director of operations at the time, recalled: “The storm came across the Gulf of Maine, gathering intensity all the time. We knew that we were in for a storm, then a big storm, and then a blizzard. The forecast was for 50cm, then upward of 60cm.

“We knew it was going to be a big blizzard 72 hours out, but even the forecast the night before underestimated the magnitude of it. We knew we were in for the biggest storm of the season.”

St John’s is the country’s most easterly city and situated on the edge of the Atlantic Ocean, so it gets more snow and wind than any other airport in Canada, according to Mr Morris. “There are a lot of times we get hurricane-force winds. Once a month or more,” he said.

The airport typically gets four or five 9.8in to 11.8in (25 to 30cm) storms every season, with an average annual snowfall at the airport of 131.9in (335cm), but what ahhpened last January was unprecedented. With ‘Snowmaggedon’ bearing down on them, the airport’s staff began to batten down the hatches.

Mr Morris explained: “We activated our Emergency Co-ordination Centre because we knew this would be a very significant event. In the days running up to [the blizzard], we made sure all the equipment that could be made working was working. We asked the tenants to secure their equipment and do general housekeeping to make sure nothing would get in the way during snow clearing.

“We had our fuel tanks topped up on Thursday and again on Sunday. We had enough diesel to run flat out for four days.”

The terminal area forecast issued on January 16 warned off air carriers. The only aircraft left on site were those belonging to intra-provincial airlines and Cougar Helicopters. They tucked their aircraft in their hangars. “The air carriers had a look at the forecast and made the decision on the 16th to cancel all flights on the 17th. Our forecast was bad enough to put off any aviator,” Mr Morris said.

When it became clear that the storm was going to be a monster, the airport executed a plan to accommodate key personnel and 40 winter maintenance operators in the airport hotels. “‘If you come to work tomorrow you can plan on being stuck here’, they were told. We knew if they went home, they wouldn’t be able to get back,” he explained.

The airport shut down on the morning of January 17 and the snow began to fall.

It was good snow to work with

For this event, however, it was all hands on deck, with two shifts of winter maintenance operators working flat out. “We had 20 working during the day and 20 at night,” Mr Morris said. “The crews did a wonderful job.” The night shift clocked off at 8am on January 17 and headed to their hotel rooms, then a fresh crew took their places as the storm spooled up.

The snowfall rates were steady at 1.6-2in/hr (4-5cm/hr), but intensified in two phases, according to Morris: “It started about 6.30-7am with moderate winds and heavy snow that restricted visibility to 1,000ft runway visual range. The actual runway conditions weren’t too bad.” Fortunately, the snow was quite light. “It was good snow to work with – not too heavy. If you get really wet, heavy stuff you can’t put the whole blower in the snow, even at over 1,000hp,” he explained. “It was an all-snow event, which was a little unusual for us. We didn’t spread any chemicals at all.” 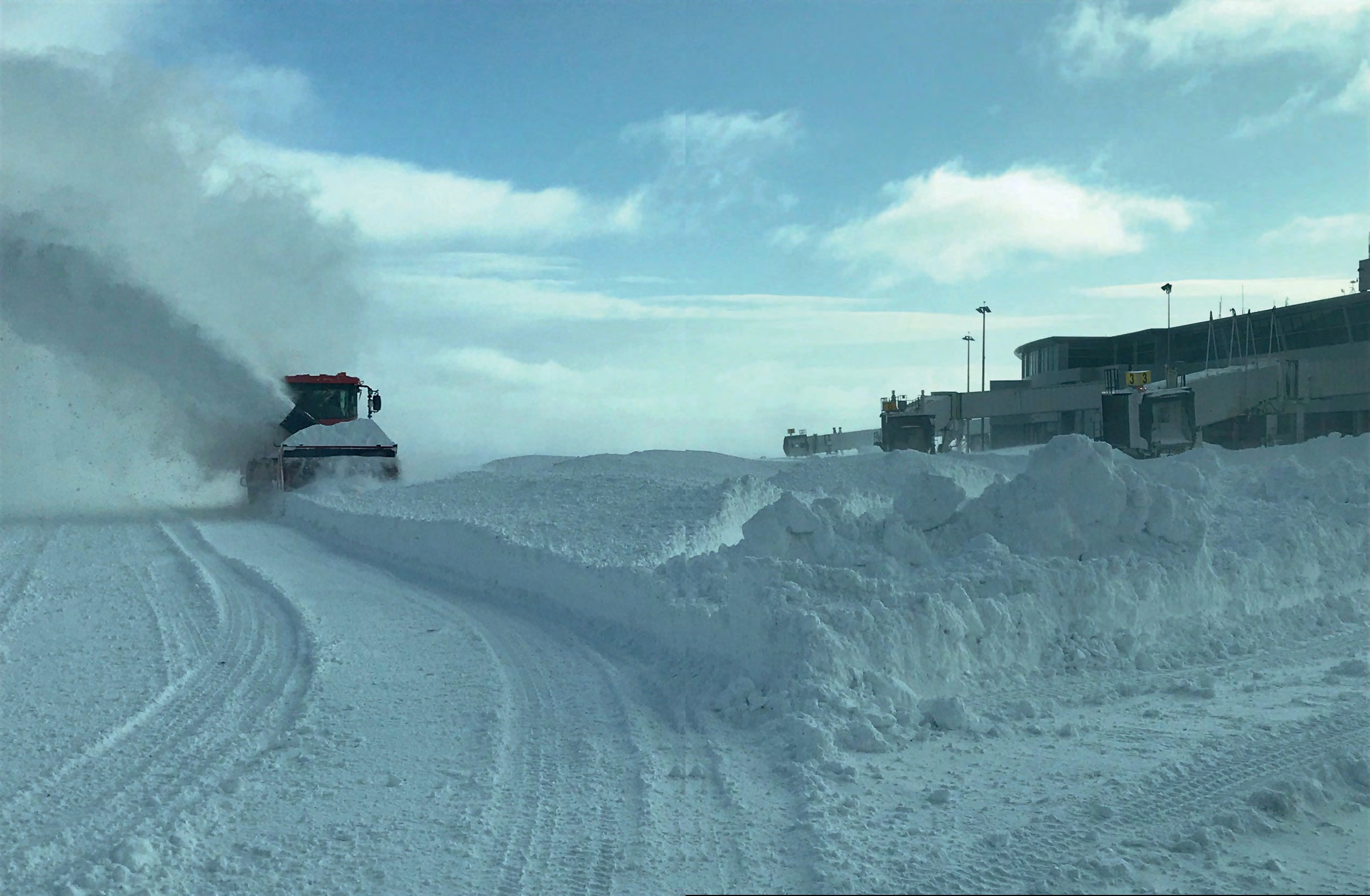 The snow was light, rather than wet and heavy, making it easier fare for the blowers. The high winds helped to keep the airport roof clear

Throughout the day, the snow removal crew fought the good fight, but eventually had to pack it in. “We were just keeping the snow off the runway. Around 5pm the wind really picked up [and] went haywire – 80 to 90kts and higher. We pulled everyone off the airfield. We ‘surrendered’,” Mr Morris recalled. “The winds were off the scale. I had to go out at one stage and I couldn’t see the hood of the car – couldn’t see a thing.” One of the only positives was that the powerful winds kept the airport roof clear of snow.

The wild howled, blew the snow into drifts 5ft high and blasted it into seemingly impenetrable spaces. “We had 120cm drifts in the garage that blew in through the door seals. With the passenger boarding bridges, at one stage we were down to [only] one that was operating – we covered up the control panels, but the wind was so strong that it blew the snow past any kind of door or seal, no problem at all,” he said.

The wind damaged or tore away weather instruments, yet only a couple of the airside signs blew over. None of the approach towers, new in 2015, were damaged and the airport lights stayed on. “Our power supply and building are engineered for a lot of wind. We didn’t even lose power, other than a couple of power bumps,” he said.

By Saturday morning, 30in of snow had fallen and the storm had moved on. “This was what Toronto [airport] gets in a whole season. We got that in 24 hours,” he added.

Under blue skies, the big clean-up got underway. Crews armed with shovels cleared off the radar and rooftop air conditioning units, while the big machines roared around on the runways, taxiways and aprons, clearing as close as practical to the edge lighting. “When we plough the runways, 55-59m is as far as we go with the big equipment. The lights are hand-shovelled out,” he explained. “In the middle of all this, we had to clear critical areas around the ILS. We had instrument approaches, but no precision approach availability. While the airport was closed to all but military and air ambulances, it gave us time to uncover the ILS and clear around them.”

‘The airport was ready to resume commercial operations on the Sunday, but the highways and St John’s itself were still buried under snow’

“You have to clear 300m in front of the antennae and 100-150m off to the sides at their widest points. You have to clear the whole thing before NAVCAN will turn it back on. We had the three ILSs done by the end of Monday, cleared right down to the grass and asphalt. It took 10-12 hours per ILS to clear. The longest one took about 30 hours to complete, using ploughs, dump trucks, loaders, blowers.”

The airport was ready to resume commercial operations on the Sunday, but the highways and St John’s itself were buried in snow. The first post-blizzard flight was the military bringing in around 200 troops to help dig out the city. Then the airport had another snow event – “a wet sloppy mess” – on Sunday night. The first scheduled commercial flights departed Wednesday morning, once the state of emergency had been lifted. 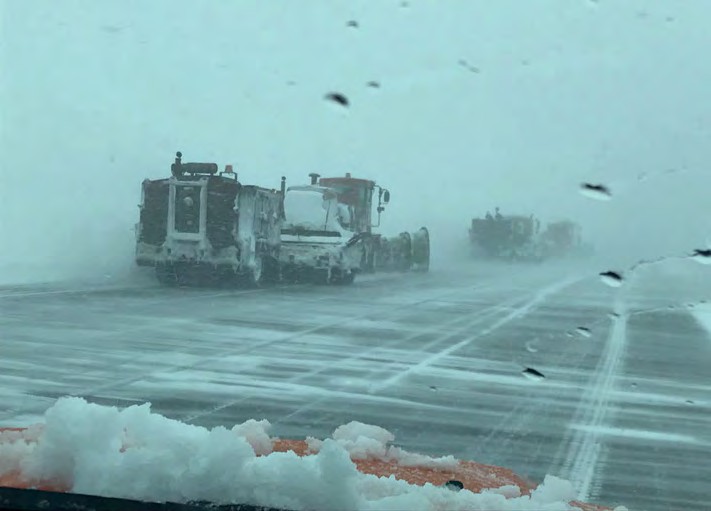 The winter maintenance crews managed to keep the runways clear all day, but had to admit defeat and retreat by suppertime

Nine loaders of various sizes, the largest of which is a CAT 980 with a 42ft (107cm) MetalPless blade 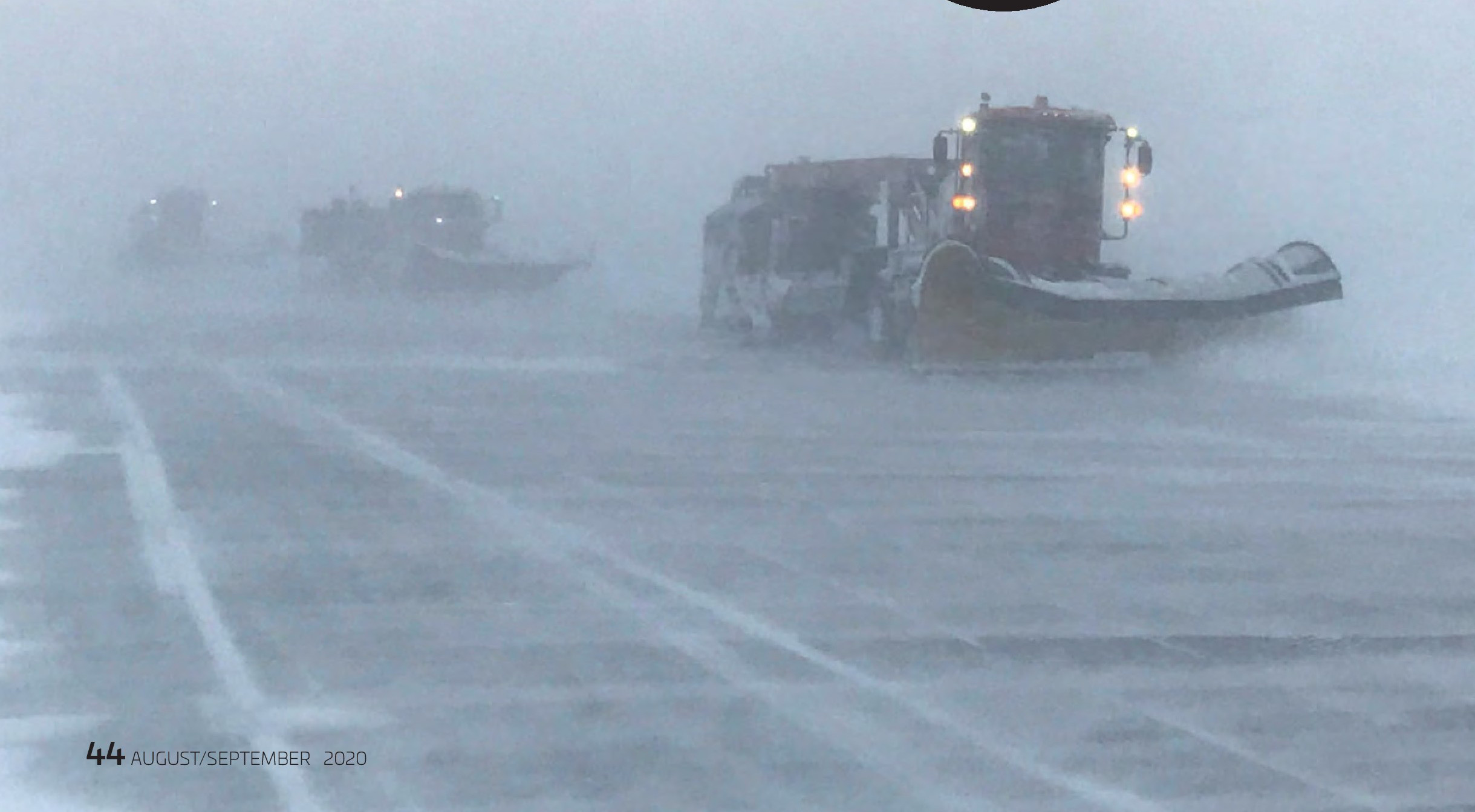